RoFI is a platform of modular robots developed at Faculty of Informatics at Masaryk University. The platform is designed for building larger robots (RoFIbots) from a small number of module types.

The modules of the platform can connect together using RoFICoM. Mechanically connected modules can communicate over TCP/IP and share power. The modules are designed so they can assemble on their own and autonomously accomplish given task – if you know StarGate you can think about RoFIs as primitive replicators.

Context & Motivation for the Project

The RoFI Platform is not the first project of this kind. There are already plenty of other similar projects out there – namely M-TRANS, Roombots, or SMORES. There is also plenty of theoretical papers out there that deal with algorithms for reconfiguration of such robots and control synthesis. However, an interconnection of these two research branches occurs only spuriously. We guess this is due to two factors: 1. the hardware publications often lack proper documentation as it is usually confidential and there is no possibility to get physical modules for verification of algorithms. 2. The algorithmic publications often omit details of the physical limitations of the modules.

Therefore, with RoFIs, we aim for an ambitious goal – to introduce a new modular robotic platform, specially designed to overcome the gap between algorithms and the physical world. We would like to provide an easy-to-use robotic platform which we and the other researches in the field could use and demonstrate their results in the physical world (we are aware of the potential problem explained in XKCD 927). Therefore, we share our work under permissive licence – all parts of the project are open-source and open-hardware. You can download the project sources at the GitHub repository. We also care that all the components we design and use are either easy to buy or easy to manufacture without many specialized tools so everyone can replicate our results.

Why Should I Care About Modular Robots?

The modular robots should be versatile compared to traditional robots, which are usually crafted for a single task or a single environment. Most papers present these robots as a solution for rescue or planet colonization: 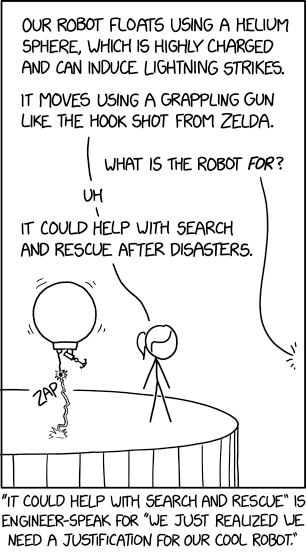 However, we see the potential of these robots elsewhere – they can build new machines without much user effort. There machines made out of modular robots will probably never be cheaper than a single-task crafted robot. Nor they will not be more efficient of precise compared to single-task oriented robots. However, they will provide solution which is “good enough” for many applications.

We saw similar situation with 3D printers: A 3D printer allows the user to produce parts. These parts, in comparison to parts produced conventionally (milling, turning, or casting) have low quality and cannot be used in production. The 3D printed parts are weak, have a poor surface finish, and on a large scale, they are not efficient – they take too long to produce. However, for many purposes, they are good enough. It is also much easier to 3D print a component than to use traditional processes as it is trivial to prepare the manufacturing data, and the user does not have to be highly trained (which is not the case e.g., for CNC milling). Therefore, 3D printers are popular today. They are not (and in our opinion never will be) used in production. However, they serve well in development and research. We think the same about modular robots – building a robot out of modules is not efficient and does not serve well for mass application compared to single-task-crafted robots. However, to build a robot out of modules should be trivial for the user, and in the best-case scenario, the robot builds itself based on user specification. Similarly, 3D printers were expensive technology; however, they become dirt-cheap today. We expect similar to happen with modular robots.

I Want To Know More About The RoFIs

The best place to start exploring our project it to checkout the platform overview or to go through the README files in the project repository.

If you have comments or questions about RoFI, please send an email to rofi at fi.muni.cz.